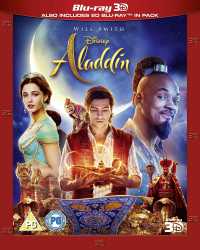 In a self-aware moment from the new live-action “Aladdin,” a character holds up a sketch of three other characters. The sketch is a line drawing done in the style of the hit 1992 animated “Aladdin,” the basis of the movie you’re watching. It’s simple, fun, and direct, more concerned with being delightful than with looking “real.

The remake—directed by Guy Ritchie, with Will Smith taking over for the late Robin Williams in the role of The Genie—flips those priorities. That’s not to say that it’s never fun, because it sometimes is—just that it’s more often lumbering, patchy, meandering, and generally bereft of inspiration. It’s a dancing elephant of a movie. It has a few decent moves, but you’d never call it light on its feet.

The film is unfortunately a perfect illustration of an observation by Josh Raby, summing up this era of both Disney features and computer animation: “Using CGI to turn expressive animated films into photoreal reboots feels like using a magic wand to make a toaster.”

This “Aladdin” is still the funny-sentimental-inspirational story of a poor “street rat” who comes into possession of a magic lamp and a magic carpet, summons a big blue genie, and embarks on a scheme to win the heart of a princess and stop an evil vizier from stealing the kingdom away from the heroine’s dad. There are at least two potentially good and somewhat original takes struggling get out of this remake and assert themselves.