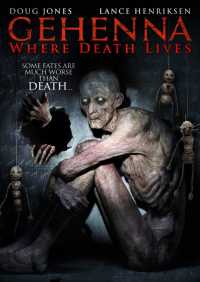 As a dictionary-style onscreen definition explains at the start of “Gehanna: Where Death Lives,” that G-word is a long-standing term for a “most accursed place [or] destination of the wicked,” although not necessarily to be confused with Hell.

(It has different histories and meanings in Judaism, Christianity and Islam.) An opening sequence of an old man having his face ripped off by muttering ritual practitioners in loincloths certainly doesn’t make it seem an ideal getaway spot.

Nonetheless, this English-language directorial debut for makeup FX specialist Hiroshi Katagiri sets its protagonists on a sacred burial spot they hope to turn into a commercial resort — something to which the resident spirits take great exception, natch.

Trapped in an underground labyrinth, their predicament becomes all too relatable, since the movie itself strands viewers in a dimly lit purgatory that grows interminable, with little in the way of scares or excitement as relief. It’s not a total wash,

but the eventually dreary mix of vague religious morality and rather ponderous horror suggests Katagiri should pay more attention to script development next time out. The film, which premiered at festivals in 2016, launches in U.S. theaters and on VOD May 4.