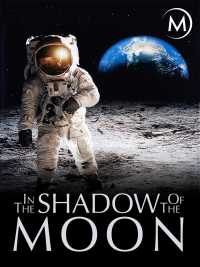 In the Shadow of the Moon is a serial killer flick that spans decades and straddles genres, combining thriller with science fiction, police procedural, and time travel. Yet while the film’s ambitions are lofty, it isn’t quite the sum of its parts, playing a little earnest for much of the run-time, and climaxing with some pretty painful plot machinations.

The movie starts in encouraging fashion, the first 30 minutes playing out like the finale of another film, which makes sense as proceedings progress and the film starts hopping back then forward in time.

Following an explosive prologue set in 2024, the film journeys to 1988, and we meet Thomas “Lock” Lockhart (Boyd Holbrook), a Philadelphia police officer with a pregnant wife at home and plans to make detective at work. While patrolling the streets with partner Maddox (Bokeem Woodbine), Lock stumbles over the case that could make his name.

A hooded figure is running around town and sticking seemingly random people with a lethal injection that causes them to bleed profusely, before their brain hemorrhages and melts. The victims’ locations are miles away from each other, but their times of death just minutes apart. The murders – and their aftermath – cause mass panic all across Philly, with violent protests threatening to tear the city apart.

So what connects the victims? Why are they being targeted? Is this the work of a single killer or are there multiple murderers on the loose? Lock endeavors to connect the dots, and following a spectacular chase by car and on foot, pursues a suspect into the subway, where things take a surprising turn.