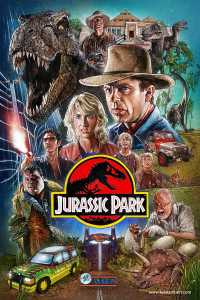 On June 11, 1993, Steven Spielberg ushered in a new franchise with the launch of Jurassic Park. The 126-minute film, which set fire to the summer box office that year (“dino-mite,” as a Hollywood Reporter headline blared), would spawn a series of tentpole films for Universal over the course of the next two decades. THR’s original review is below:

Chaos theory, a new form of mathematics, studies unpredictable systems — weather, the stock market, rioting crowds — any system that will eventually show unpredictable behavior, such as a theme park filled with dinosaurs or, for instance, how many people will come to a movie.

While chaos theory in Michael Crichton’s best-selling novel correctly predicts that a modern-day system containing dinosaurs will result in unimaginable catastrophe, you don’t need chaos theory to predict this jaw-dropping, palm-sweating, eye-popping entertainment will become the Blockbustersaurus rex, the king of all blockbusters. In theme parke-ese, it’s an EEEEEE ride.

Steven Spielberg has cloned classic strains from the highest lineage of monster/action movies, spliced them with the most realistic genes of family entertainment and unleashed them through the most powerful forces of technological aesthetic to create a truly colossal movie experience. With an all-star technical team, many of whom have pushed then envelope before in such juggernauts as Star Wars and Terminator 2: Judgment Day, Spielberg has wondrously implanted the highest strains of science fiction within the supple body of a very human story.

Jurassic Park descends from a vaunted sci-fi narrative line: the fury that man unleashes when he tampers with the higher forces of creation. The arrogant provocateur in this case is John Hammond (Richard Attenborough), a twinkly old goat and self-made man who is kind of a dark cross between Colonel Sanders and Walt Disney. Hammond’s spared no expense in creating the greatest theme park of them all: a secluded Caribbean isle that takes the theme park/animal arcade to its most unbelievable dimension.