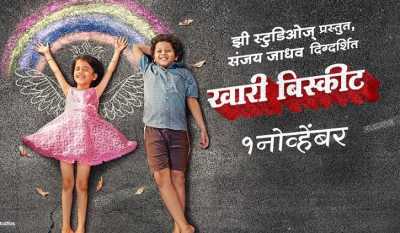 The story of poor little children who aspire to achieve something big has always found takers in cinema, not just in India, but around the world. Majid Majidi’s Children Of Heaven (1997) remains a classic example as far as world cinema is concerned.

Marathi cinema has seen this genre explored recently in the form of Paresh Mokashi’s Elizabeth Ekadashi (2014) and Samit Kakkad’s Half Ticket (2016), the official remake of the Tamil film Kaaka Muttai (2014), to name a few.

Similarly, director and cinematographer Sanjay Jadhav’s Khari Biscuit (2019), which falls in the same genre, also has potential. The idea of a little boy trying his best to make his blind younger sister feel better about their life itself wins your heart, more so if you have seen the trailer.

Elaborating further, the story takes place in 2011 and revolves around Biscuit (Adarsh Kadam) and his younger sister Khari (Vedashree Khadilkar), who is visually impaired. The two kids, who are orphans, live in a slum in Mumbai. But Biscuit has never let Khari know that they are poor.

He is fulfilling their late mother’s promise to make Khari think that she is a princess staying in a bungalow. Her mother is fine with Biscuit lying to Khari to disguise their current conditions.