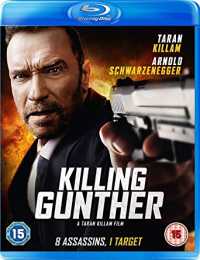 Only in his hilariously taunting online videos addressed to Donald Trump does Arnold Schwarzenegger seem to be having more fun than in Taran Killam’s violence-infused mockumentary Killing Gunther. Playing the titular role of Gunther, a legendary hitman, the veteran action star clearly relishes the opportunity to sing country music, pose in lederhosen and deliver such lines as “My cappuccino is to die for.” Unfortunately, Schwarzenegger doesn’t show up until more than an hour into this relentlessly unfunny comedy, and by then, viewers may have tuned out long before.

The film marks the directorial debut of former Saturday Night Live performer Killam, who also scripted. Not surprisingly, it has the feel of an extended sketch, albeit the sort of mediocre one that fills out the show’s final minutes. Killam also plays the lead role of Blake, a career assassin who makes it his mission to dispatch his primary rival, Gunther, the world’s most notorious hired killer. Besides seeking to establish his own reputation, Blake also has a personal motive, since his former girlfriend (Cobie Smulders, Killams’ real-life spouse), with whom he’s still desperately in love, had a fling with Gunther after they broke up.

Blake rounds up a special crew to help him, including a bumbling explosives expert (fellow SNL player Bobby Moynihan); a female sharpshooter (Hannah Simone) with an overprotective father (Peter Kelamis); a “technology operations and intelligence specialist” (Paul Brittain) who proves adept at neither; a poison specialist (Aaron Yoo) whose particular skills are of little use during shootouts; and a pair of Russian siblings (Ryan Gaul, Allison Tolman) with anger issues. Blake also “hires” a film crew — or more accurately, threatens to kill them if they don’t cooperate — to document the team’s efforts.