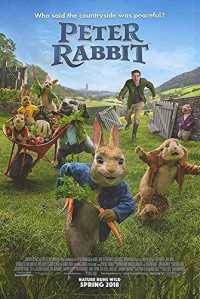 This attempt to turn Beatrix Potter’s creation into a sassy, low-grade British Bugs – voiced by Corden – is cynical and tiresome

Prepare to enter a valley both uncanny and unfunny with this tiresome film, whose director and co-writer, Will Gluck, appears to have responded to an urgent question echoing inside his own head: “When, oh when will someone take the twee merchandisable ickiness of Beatrix Potter’s great creation Peter Rabbit and turn it into a sassy live-action animation like Babe or Alvin and the Chipmunks?”

Those with long memories and strong stomachs will remember Renée Zellweger playing Beatrix in Miss Potter, and how her creations appeared to wrinkle up their little rabbity noses at her from the drawing paper. Gluck (known for the comedies Friends With Benefits and Annie) has excised the olden-days National Trust tea-towel cutesiness and reinvented Peter Rabbit (voiced by James Corden) as a PG-certificate lite-badass comic, a lower-grade British Bugs, forever leading the other rabbits in raids on Mr McGregor’s vegetable patch.

Next door lives Beatrix herself (played by Rose Byrne): an aspiring conceptual artist who draws the traditional images of Peter Rabbit et al in her spare time. When old Mr McGregor (Sam Neill) keels over, his cottage and surrounding grounds are inherited by his villainous, thin-faced great-nephew Thomas (Domhnall Gleeson). Thomas is a low-grade manager in the Harrods toy department – a deeply unironic bit of commercial branding and product placement. And he is a bit of a tyrant. But wait: Thomas also has to be a potential nice guy as well, murmuring to Beatrix that he loves helping people at the store. Soon there is canoodling between them.

This movie has got into trouble for showing someone with a blackberry-intolerance being deliberately attacked. A cynically targeted sweet substance causes the victim to go into anaphylactic shock. I can relate.