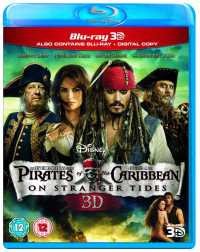 Overview – From Disney and producer Jerry Bruckheimer comes all the fun, epic adventure and humor that ignited the original. Johnny Depp returns as Captain Jack Sparrow in Pirates Of The Caribbean: On Stranger Tides. A tale of truth, betrayal, youth, demise — and mermaids! When Jack crosses paths with a woman from his past (Penélope Cruz), he’s not sure if it’s love or if she’s a ruthless con artist using him to find the fabled Fountain of Youth.

Forced aboard the ship of the most feared pirate ever, Jack doesn’t know who to fear more —Blackbeard (Ian McShane) or the woman from his past. Directed by Rob Marshall, it’s filled with eye-popping battle scenes, mystery and all-out wit.

It’s funny, as I’m rarely able to do so, but I can pinpoint the exact moment that ‘Pirates of the Caribbean: On Stranger Tides’ lost me, the moment where I felt I was watching an inferior knockoff to the original film trilogy.

That moment, sadly, was far too early in the film, as the opening sequences concerning yet another daring escape by Captain Jack Sparrow (Johnny Depp) had that lingering feeling like we’ve seen it before, some time ago…only better, and in the same series. As the world’s most unconventional, seat-of-his-pants pirate works his magic in the heart of London, in front of the King, no less, outsmarting an army at the heart of their strength, I wasn’t pulled into the film, I was tempted to look at my watch.