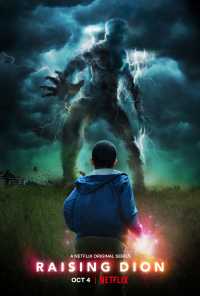 With Disney+ on the horizon, Marvel is taking their ball and heading to their new home, leaving Netflix a little light on the superhero fare that has come to dominate cinemas and streaming services. Netflix can’t go without a plethora of America’s current favorite genre for long.

Superhero stories resonate with wide audiences for several reasons, mainly because in a world that feels increasingly out of control, all of us want to see justice enacted, for good to overcome evil, and for someone that resembles a regular person like us become a better, more powerful, and more altruistic version of themselves.

The key to that last part is “resembles a person like us,” and though creators are starting to widen their scope to tell more inclusive stories that represent a wider array of identities and experiences, there’s still more work to be done.

Comic writer Dennis Liu knew this when he created Raising Dion, a story about a 7-year-old African-American boy Dion developing powers and his black, single widowed mother Nicole trying to protect him. Liu’s story led to a viral Raising Dion short film, and now a nine-episode series on Netflix.