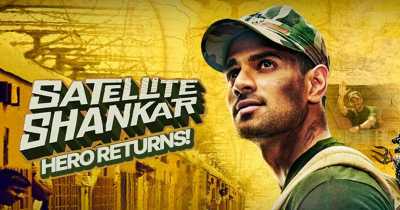 There’s something relentlessly cheerful about this cheerleader-for-the-Armed-forces film called Satellite Shankar. It’s the kind of maa-ke-haath-ka-khaana-and-furlough missing-ek-bahadur-fauji-ki-dastaan that Hindi cinema was filled with in the 60s and 70s, all mush and schmaltz, and loud bumper-sticker patriotism.

Stir that up with the current age of muscular nationalism, and the spread of social media, and we have Shankar (Pancholi), a perfect Indian, a mix of the North and South. He is a soldier whose adventures connect us ‘desh-wasis’ in a tsunami of love and concern, from Kashmir to Coonoor. Scratch that, not Kashmir, uh-huh, because there reside the stone-pelting, pheran-wearing, skull-cap-bearing anti-nationals: for a film which wears its ‘deshbhakti’ on its sleeve, to single out the vaunted, troubled paradise on earth, is both singular and revelatory of an appeasing-the-establishment agenda.

And that’s a pity because otherwise this film enthusiastically spreads good cheer along Shankar’s way, as he heads towards his mum and grandmum, in planes, trains and automobiles. Awakening a comatose old lady here, saving dying citizens there, fixing corrupt netas and cops in between, while having a running engagement with a spirited video blogger (Ghosh) who puts the soldier and his story on the map.

This very Forrest Gump-ish intent could have been better realized if the plot had been less simplistic, and the lead actor a little more versatile. He’s pleasant enough, has a spiffy hair-style which remains unruffled all through the way, whether he is beating up a bunch of men, or climbing a sparking electricity pole, or chasing after trains. But that’s about it.

A pretty young girl’s (Akash) sweet dalliance with Soldier Shankar adds an interesting flavor, and lifts it out of the straight and narrow. But the film needed more nuance, more layers, and much more magic. Are you a satellite or a tubelight, asks the girl. We laugh out loud. That’s a funny line, well delivered. It’s fun. That’s what fable-like tales require.