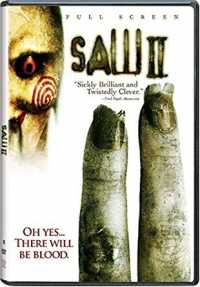 Last year’s mercilessly unpleasant “Saw” was an unexpected Halloween treat for horror fans fed up with the genre’s recent shift toward tongue-in-cheek. “Saw II,” directed by a newcomer, Darren Lynn Bousman, delivers similar hard-core, practically humorless frights and hair-raising tension, but only after getting past a shaky beginning that plays more like a forensics-themed television show than a scary movie.

This time Jigsaw (Tobin Bell), who is revealed early on to be a cancer-stricken sicko with a twistedly noble purpose, is placed under house arrest, though he remains very much in control of the police who work to uncover the whereabouts of the eight latest “contestants” who are being forced to play Jigsaw’s signature life-or-death games.

Through some crafty editing, the action cuts back and forth between Jigsaw’s headquarters and the house of horror where the group members – who include the tough-as-nails Amanda (Shawnee Smith), the sole character from “Saw” to make it to Round 2, and the young son of Detective Eric Matthews (Donnie Wahlberg) – face intricate booby traps and poisonous gas and their own increasingly violent actions in order to survive.