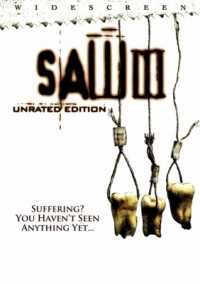 Though suffering from an exploding brain, torturer Jigsaw (Tobin Bell) has a doctor (Bahar Soomekh) wired to a heart monitor with orders to keep him alive or else a gadget will blow her head off. Meanwhile, another victim (Angus MacFadyen) runs an obstacle course: three people he blames for his son’s death are trussed to killing machines, and he gets to choose between trying to save them or gloating over their murders.

The Saw films are now a proper trilogy, which means you’ve no hope of picking up the plot starting here. The upside is surprisingly good acting, but this time the script (and torture devices) are more contrived, and thus less effective. Fans of hard-to-watch impromptu cranial surgery performed with power tools will be in liquidised maggoty hog heaven, though.