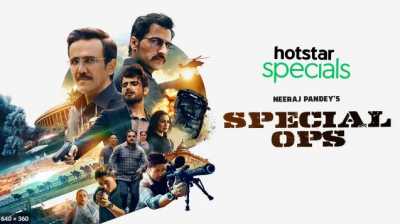 Intermittently gripping and slow-burning, Special Ops, an eight-episode Hotstar series created by Neeraj Pandey, is a sprawling espionage actioner that takes its own sweet time to glide towards two suspenseful climactic build-ups. One of them is a genuine now-or-never flashpoint, the other turns out to be something akin to a red herring despite whipping up a fair degree of tension and anticipation. That is the kind of thriller this is: a mixed bag, steady and neat in the matter of laying out the details but a tad tentative, if not wholly feeble, with its final punch.

The six-and-a-half-hour web-series, which Pandey has directed with Shivam Nair, is a watered-down and elongated version of his 2015 big screen actioner Baby. That isn’t a bad thing at all. For one, it is shorn of overt Islamophobic alarmism. Maintaining an even keel, the directors craft this tale of an undercover operation as a straightforward drama about spies on the trail of a terror mastermind nobody has ever set eyes on.

Kay Kay Menon, who played one of the principal bad guys in Baby, is cast here as an unbending R&AW officer, Himmat Singh, whose single-minded pursuit of the ‘main’ suspect in the 2002 Parliament attack – a shadowy, slippery figure who got away after the act – constitutes the spine of the story.

The lead actor makes it a point not to play to the gallery, opting instead for a subdued, undemonstrative style. The approach helps Menon lend a steely aura to the plain-speaking secret service agent who inevitably knows too much but revels in playing it by the ear rather that in drawing hasty inferences from the dribs and drabs of info that trickle in from the field. He plays a patient waiting game, which explains why the action in Special Ops spans nearly two decades and unfolds at a deliberate pace.