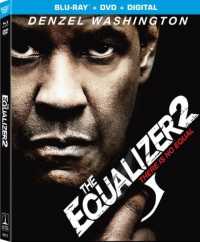 I half hoped that Denzel Washington’s decision to do his first sequel, teaming up yet again with director Antoine Fuqua, would somehow result in something brilliant. One never knows, we could be treated to a scintillating action-thriller expanding upon the impetus of a quiet, ex-Army Lyft driver who spends his spare time balancing injustice through acts of bravery and uncompromising violence. Not so much, unfortunately.

There’s a moment in ‘The Equalizer 2’ when these traits are described in superheroic terms, and it’s clear that the sequel’s script toys with contemporary big-canvas comic book tropes. Even the likes of the ‘Mission: Impossible’ films are echoed here, particularly in a set-piece that takes place (for no reason seemingly other than cinematic convenience) on an Istanbul-bound train.

Upon returning to his quiet life in the U.S., we see Robert McCall (Washington) go about his angel-like deeds, righting wrongs for elderly Holocaust victims and immigrant gardeners alike. However, when his own world is turned upside down by a betrayal, he must confront his past, turning the film into a kind of cat-and-mouse chase set, naturally, in the midst of a hurricane.

The supremely frustrating thing about ‘The Equalizer 2’ is how stupid the movie is despite a really smart, compelling screen presence by Washington. When he’s providing quiet retorts or beaming his sardonic, electric smile, it’s a sheer delight. Sadly, while the actor’s performance is perfectly calibrated, the storyline betrays his craft, piling on more and more preposterous things that take away from the subtle notes he’s offering.

The finale is the most egregious, but save for some fatherly advice, his relationship with one of the main people he supports plays more like a lecture than a real connection. What could be a neat twist on the damsel-in-distress trope instead becomes frustrating, leaving viewers to wonder just what it would take for even an abandoned seaside town to have some police presence take an interest.