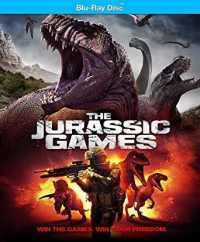 In an alternate future, the proliferation of reality TV has finally reached its logical conclusion; total global domination! It’s at that point where even our legal proceedings- and more worryingly, the practice of capital punishment itself- have been bastardised into a sick form of televised entertainment, complete with vomitous merchandising and vulgar corporate sponsors.

With tasteless spectacle having usurped fair trial and due-process, the emphasis is no longer upon determining the guilt or innocence of the accused. Instead, it is all about sentencing them to the goriest and most sensational ends imaginable. Enter

The Jurassic Games’’: an annual tournament that has convicts fight to the death, in an attempt to secure their freedom. All they have to do is emerge as the last one standing and they get to go home.

Only there’s a twist! Whilst this might appear to be a straightforward free-for-all, teamwork is still advised, as the contestants have more to worry about than just each other. Indeed, there are bigger, badder, toothier things to contend with in the arena.